Much as I love fireweed, I have been dreading the great fuzz-out that I know is going to happen.  All those brilliant flowers turn into thin pods, which explode into fuzz.  I'll admit that I still have fuzz on my screens from last fall, and there wasn't very much fireweed last year compared to this year.  So yesterday I was out there pulling up the fireweed directly around my house (below my bedroom window, that would likely attract large quantities of fuzz), much to my kids' amusement.  They don't care about such things as fuzz on the screens. 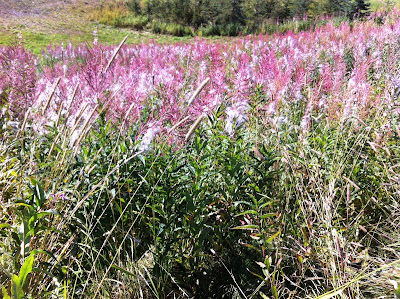 Last weekend while at a cross-country running race in Soldotna, it looked like it was snowing there was so much fireweed fluff in the air.  People were walking around batting at the fluff balls that were hitting their faces, coming from the field pictured above.  Like one person said, with this many fireweed seeds flying around we'll have even more fireweed next year.  That I cannot even imagine.  It was stunningly prolific this year.  I'll be curious to see how it all turns out.  Meanwhile, it is raining now with more rain on the forecast, so that keeps the fuzz under control!

Haha! Here in Newhalen, the fuzz isn't too bad. Sorry it's kicking up near Homer! Awesome blog, keep writing! :)

Haha! Here in Newhalen, the fireweed fluff isn't too prevalent. So sorry it's bad near Homer! Great blog, keep writing!