While my husband was at beginning-of-the-year administrator meetings this week in Soldotna, my daughter, a friend of hers and I decided to take a day to go hiking.  Skyline is on our list to hike every year, so even though my quads were still sore from climbing Bird Ridge days before, I agreed to give it a shot.  Our plans were foiled from a direction we didn't expect.

As we walked up to the Skyline trailhead information board, we noticed a "Brown bear in area" sign posted, dated June 6th.  "Uh, oh," I said, "time to get out the bear bell."  I dug in the backpack and velcroed the bear bell onto my pack while my daughter snorted her derision.  We'd never seen a bear on this trail, nor even bear scat in all the times we'd hiked it.  Twenty or thirty minutes later as I was climbing along, I heard the girls chattering excitedly and heading towards me.  My first thought:  bear!  What else could get them to turn around and practically run down the trail, far from the summit?

Apparently Aurora, who was in the lead, thought the bear was a dog at first.  The black bear was heading down the trail and she was heading up and they were about 10 feet away before they noticed each other.  The bear immediately melted off into the brush and Aurora and her friend immediately got out of there as fast as possible.  When I asked if they got a picture they laughed and said, "Uh, we weren't really thinking about anything except, 'Bear.  Get out of here!'" so my apologies to my readers for no picture!

The bear was small enough the girls figured it probably had a momma nearby, so rather than just keep going (which is my natural inclination), we opted to head down and find another trail to hike.  Too bad because the Skyline was in better shape than I've ever seen it, with so little rain this summer.

Ironically, the next hike we chose to do was Bear Mountain, off Skilak Lake Road.  This is an easy hike--.8 miles one way, 400 foot climb (well, certain easy compared to Skyline's 2000 foot climb in 1 mile!).  It was mostly in the shade, the trail doesn't get grown over, the bugs weren't bad, and the view is nice, topping out at 1300 feet or so.  Twenty-five minutes got us to the top, a 10 minute run got us back down, and we were a little unsatisfied so decided to find another hike.

The Hideout Trail, only about 1 1/2 miles off of the Cooper Landing end of the Skilak Lake Road, was our next choice.  It is a .75 mile hike, though the climb was about 865 feet (somewhere around 800; I'm recalling it from the sign).  I was impressed:  this trail has been weedwhacked a couple feet on each side, so what would have been overgrown with pushki and grass was a pleasant trail, hard-packed and in great shape.  Having it trimmed makes all the difference between a pleasant hike or a bit of an annoying hike.  On top of that, there was a breeze keeping all the bugs away, and the sun had gone behind the clouds so it was cooler. 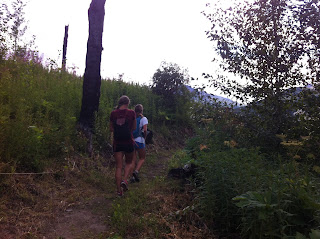 This trail is not in the shade so it would have been hot had the sun been out.  What this trail offers, though, that Bear Mountain does not, is the feel of being in a mountain meadow.  There were fields of fireweed (of course!) and views of Skilak Lake and the surrounding area much of the way up so those huffing and puffing breaks can be enjoyable scanning the Kenai River, Skilak Lake, nearby peaks and weather, not that I got many breaks at my daughter's focused pace.

Once we got to the top we were a bit sweaty and had to pull out jackets to stay comfortable.  There's a nice rock to lounge on and enjoy the sights.  After a little snack we jogged down this trail as well, which is easy enough to do with few loose gravel or rocky spots.

So between the three hikes we hiked about 3 1/2 miles and climbed about 1800 feet--more distance and less elevation than Skyline so it wasn't as difficult.  I hatched an idea to have an annual event called "The Great Skilak Challenge" to hike all the trails in the Skilak Lake Area in a day (seemed like we were working towards that!).  I think that would be fun, and it would be a challenge!  It was a fun few hours and we got to check out 3 different trails!  It was a good day to be in the woods.