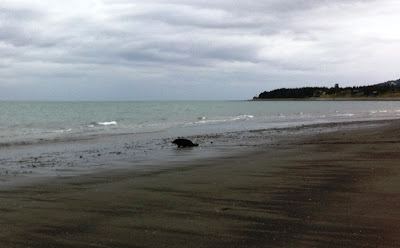 As we were walking north of Mariner Park yesterday along the beach towards the breakwall, we saw what looked like an unusually shaped rock that we didn't recall being there before.  As someone's dog ran towards the rock, it began to move and we saw it was a sea lion.  It dragged itself towards the water, and as the dog ran off and we walked closer, it stopped every few feet and looked over its shoulder at us.  Within a few minutes it was in the water, swimming slowly away from shore.  Because it looked injured (and because it was on the beach in the first place) we called the Marine Mammal Stranding Hotline (1-888-774-7325) and reported it, then emailed them our video.  They said that it was a good sign that it was able to get itself into the water and they might just put a lookout notice out.  If a marine mammal can't get into the water they send someone to check on it, warning people to keep their distance from stranded animals.


(You may want to turn down your volume before clicking on the video as the wind noise is a bit loud.)

While we've seen a sea lion on land before (over at Right Beach a couple years ago one pulled itself out of the water and up the beach to check out our campfire), we've never happened upon one while walking, with the animal just sitting there.  That was a new experience for us.  We were very happy that the owner of the dog called it off, and that the dog did not harass the seal, and that it was able to get itself back in the water.